Oni Press, the comic book publisher of 25 years standing, that was merged with Lion Forge under the umbrella of the new Polarity company a few years ago, issued the following statement yesterday. It has garnered quite the reaction from the comic book industry. To the extent that I am expecting T-shirts of it for San Diego Comic-Con and I have bveen told to expect where the Oni Press panels were meant to be held, a wake tio the memory of what Oni Press once was. 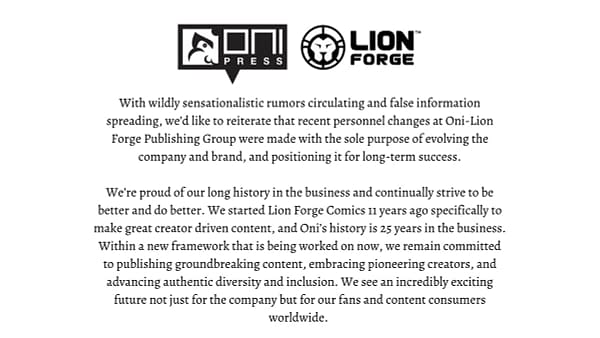 It is unclear who crafted the statement, as  Director Of Publicity Tara Lehmann, Senior VP Marketing Alex Segura or even Marketing Manager Henry Barajas, are all no longer with Oni Press. But here is the reaction from many a comic creator and publisher. Beginning with the response from Nat Gertler, publisher of About Comics.
Nat Gertler: About Comics confronts the current controversies. 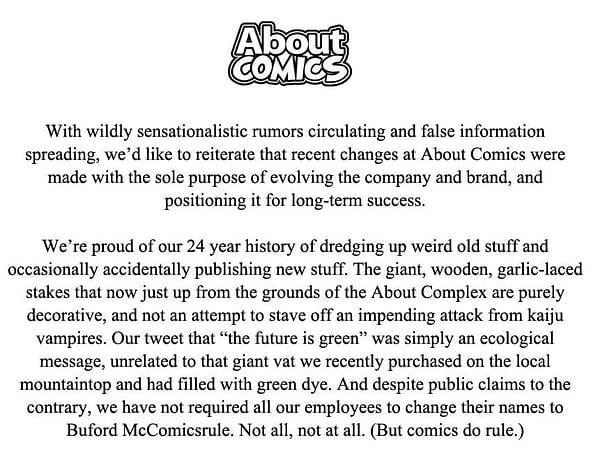 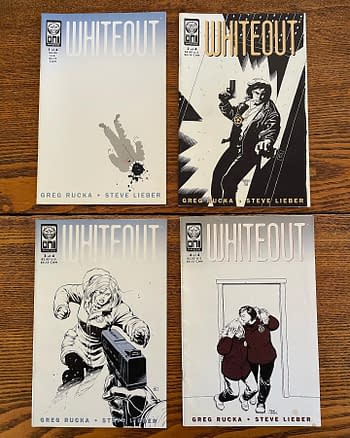 Steve Lieber: As a pioneering creator of creator-driven content, I want to let the fans and content-consumers worldwide know that I too remain committed to your consumption of ground-breaking content. This is definitely how human beings communicate ideas and emotions.
David Macho: The massacre happening at Oni Press while you read these lines is utterly disgusting. It’s a betrayal to the art of comics, to the people, editors, creators, et al., working their butts off to create quality stories, art, groundbreaking material we all love.
SHOW YOUR SUPPORT.
Jonah Weiland: I’ve watched Lion Forge repeatedly spend money poorly, mismanage and not deliver. This is heartbreaking, but not surprising. I believe they’re well meaning, but the proof is in the lack of results.
Oni was a really important independent publisher and I’m so sorry to see this happen. Hopefully someone with some money could rescue this brand and bring it back to its former glory.
Mark Waid: If you’re a creator doing anything with Oni Press, my advice for you would be to *get out now.* If your book is in their pipeline, check your contracts to see if it’s possible to terminate them and what that would take.
Feel free to share.
Enjoyed this? Please share on social media!