NFTs In A Nutshell: A Weekly Review | Bitcoinist.com – Bitcoinist

As we approach the midpoint of the year, it’s possible to reflect on an interesting 6 months of growth for NFTs. However, this week? Pure goblin mode.
This new Ethereum project dominated the conversation in an otherwise quiet week (well, relatively speaking) for all things NFT. Meanwhile, there’s plenty of phishing issues, Solana has been a star performer in a middling market, and it’s ‘conference szn.’ Let’s recap all this action from the past week, and more.
What started as a meme online has turned into the hottest NFT collection of the week. Goblintown.wtf has hit the market with no roadmap, no big plans, no official channels beyond a Twitter account, and plenty of mystery. It started the week sub 0.5ETH, and has embraced full meme-status in unparalleled fashion. Their Twitter account posts in tiny, goblin-like letters, the Twitter Spaces are just a bunch of people making goblin noises, and their community is flat-out here for every second of it. At time of publishing, goblins run a cool ~2.7ETH with over 10ETH of project volume thus far. Don’t hate the goblin, hate the game.
Solana has been holding up surprisingly well, boosted by a variety of hot projects such as Okay Bears and STEPN in the past week. The latter, however, took a hit in recent days following a ban for users of the app in mainland China.
STEPN has been a hot topic of conversation, particularly in the past week, and the platform is said to be approaching 1M active daily users – an unverified number but an astounding one if confirmed. STEPN encourages active movement and looks to reward users with daily earnings based on exercise with NFT sneakers. The project launched in December, and long-term sustainability will prove to be arguably the biggest headwind.
29 MoonBirds NFTs were siphoned from an unsuspected holder this week, snatched in an increasingly common phishing scheme that took just one wallet signature to quickly finesse the owner’s whole lot. The NFTs have been flagged for suspicious activity on OpenSea.
Related Reading | Dogecoin Climbs After Elon Musk Tweets SpaceX Will Accept The Meme Coin 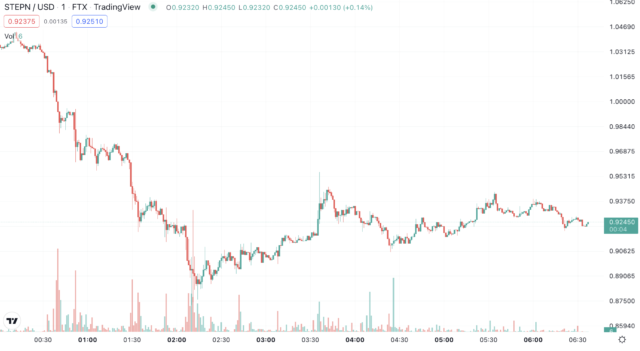 Two interesting emerging stories hit the headlines this week arounds NFTs, in very different stages of (potential) legal battles. The first story, certainly in it’s earlier stage of development is the commotion around actor, producer, writer and director Seth Green – and his Bored Ape that is seemingly leaving content hostage.
Green’s Ape, #8398, was stolen in a phishing attack that couldn’t have been more ill-timed for Green, who was on the verge of having the Ape front and center in a new animated series. Leaving the NFT community wondering where IP rights start and end, and what sort of move Green can take now to regain his Ape – or if the show will be scrapped altogether.
Meanwhile, much further along in the ‘dispute’ spectrum is the ongoing story of fashion house Hermes and it’s battle against Mason Rothschild, who released the NFT collection ‘MetaBirkins’ last year. The dispute is currently in a federal court, and while Rothschild’s collection has been determined to be a form of artistic expression fitting under the First Amendment, the court is still yet to decide whether the project’s name has had “sufficiently compelling” evidence to show a likelihood of confusion between the fashion firm’s item and the project name.
VeeCon wrapped up last weekend in Minneapolis, the first NFT-ticketed event ever, and the event and networking buzz likely hasn’t worn off as we’re less than 30 days out from NFT.NYC.
On-site featured talent like Snoop Dogg, brands like Boardroom and DraftKings, and of course exclusive NFT VeeFriends drops and more. NFT.NYC is expected to once again be scaled up following last year’s largest turnout in the conference’s short life, and expect a continued Ethereum-dominant audience.
It’s been a long time coming for NFTs and GameStop, who have had their name tied to crypto at large for a while now. This week, GameStop launched their beta version of their Ethereum-based NFT wallet, with layer-2 support courtesy of Immutable X. An NFT marketplace – which has been discussed for roughly a year now – is “almost here” according to the webpage and could be the gaming company’s next offering for the NFT community.
Related Reading | What Do We Know About India’s CBDC And Its Graded Approach?
For updates and exclusive offers enter your email.
Taylor specializes in crypto activity across sports and entertainment. With nearly a decade of engagement with cryptocurrency, Taylor has spent several years working in talent representation with musicians, comedians, and speakers, and achieved a Sports Business MBA in 2020.
Bitcoin news portal providing breaking news, guides, price analysis about decentralized digital money & blockchain technology.
© 2021 Bitcoinist. All Rights Reserved.