Ethereum priceBitcoin priceBitcoin newsEthereum newsTerra news
A curated weekly summary of forward-focused crypto news that matters. This week, Bitcoin and Bitcoin-centric stocks continue to deal with the fall-out from the Terra collapse and a bearish macro-environment. Plus, HEX, a token with a large retail community, suffers heavy losses.
Bitcoin (BTC) continues to range between 28-30K with the Bitcoin price dropping ~2.5% versus the previous week, sitting at around the US$29K price point at press time. Ether (ETH) and Binance coin (BNB) fell ~11% and ~5% respectively over the same period.
In recent weeks, we have covered the shaky macroenvironment and the more recent TerraUSD/Luna collapse that, collectively, stand out as the most obvious factors impacting crypto asset prices. Importantly, the failure has put the spotlight on how assets like UST are backed.
At the World Economic Forum’s Davos conference this past week, panels included discussion of central bank digital currencies (CBDCs) with a focus on how the public and private sectors might work together to ensure that CBDC development ultimately benefits consumers and minimizes risks to financial stability.
And, just a couple of weeks ago, Bloomberg quoted European Central Bank (ECB) President Christine Lagarde as saying that crypto assets are “worth nothing” and “based on nothing”. Lagarde contrasted this with the digital Euro, which she said she would guarantee. “So the central bank will be behind it [the CBDC] and I think it’s vastly different than many of those things.”
Lagarde’s statement clearly illustrates the two simultaneous financial revolutions taking place, each with opposing visions.
The first, beginning in 2009 with Bitcoin’s genesis block, could accurately be described as a bottom-up revolution and part of a larger movement to decentralize many aspects of our lives: including money itself. The advocates of this first revolution tend to emphasize the dangers of fiat inflation, the importance of privacy, and economic empowerment.
The second revolution, a top-down phenomenon, seeks to centralize further, and CBDCs are just one relevant manifestation. Advocates of this centralized revolution often use similar language of empowerment, but critics point out the disadvantage of further losses of privacy and the ease to which those in power could use CBDCs to, say, shut off access to the financial system for people with politically unpopular opinions (even more easily than, say, it was recently for the Canadian government to pressure commercial banks to do this on the government’s behalf).
Meanwhile, the decentralized revolution has produced a product that is (ironically) neither very decentralized nor run by the central banks. I refer here to stablecoins that, whether asset-backed or algorithmic, allow users to send value to all corners of the internet-connected world, around the clock, and without passing through central banks or waiting for bank clearance.
In light of the recent TerraUSD/LUNA “stable”-coin death spiral, it is worth a quick look at the two largest USD-based stablecoins, in case, let’s say, many of their holders tried to “cash out” at once, demanding actual USD in a bank run).
Tether (USDT) and USD coin (USDC) hold the largest market capitalization by far: worth around US$125 billion between them. Both operate on multiple blockchains, but of the two, USD coin is the one that boasts itself to be “fully regulated” and “fully backed by cash and short-dated U.S. government obligations”.
For its part, Tether is legally bound to be more transparent as part of a settlement reached with New York Attorney General’s office last year. It lists ~86% of USDT’s reserves as “Cash & Cash Equivalents & Other Short-Term Deposits & Commercial Paper”. Another ~5% is listed as “Corporate Bonds, Funds & Precious Metals”, and ~4% listed as “Secured Loans”, this leaves another ~6% listed as “Other Investments (Including Digital Tokens)”. No further breakdown is provided for what is meant by “digital tokens”, but the “stability” of a stablecoin ultimately depends on redeemability. If those digital tokens happen to be highly volatile cryptocurrencies, this will be one point worth watching for users of stablecoins — especially if the percentage increases over time.
The Terra community voted to accept the proposed rescue plan and major exchange Kraken has announced a listing of Terra 2.0 (LUNA2) with USD & EUR trading pairs.
2-3 June
Blockchain Fest 2022 will take place in Singapore this week, attracting top players in “Blockchain, Exchanges, Cryptocurrencies, Decentralized Finance (DeFi), NFTs, Mining, Gaming and Gambling, Online Payments and Investment”. 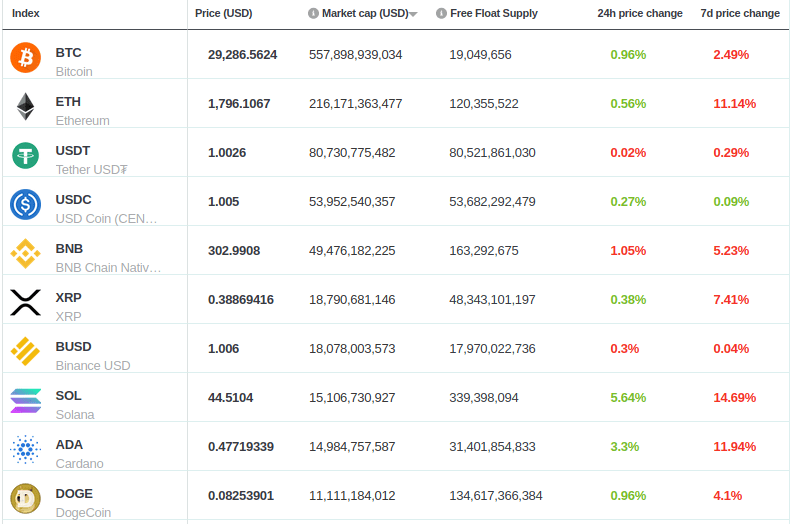 Yet another downward week for almost all top-10 digital assets by market cap. Solana (SOL), the native cryptocurrency for its proof-of-history blockchain (based on proof-of-stake), took the sharpest dive among the top-10 for the second week in a row. Cardano (ADA) and Ether (ETH) were the next hardest hit. 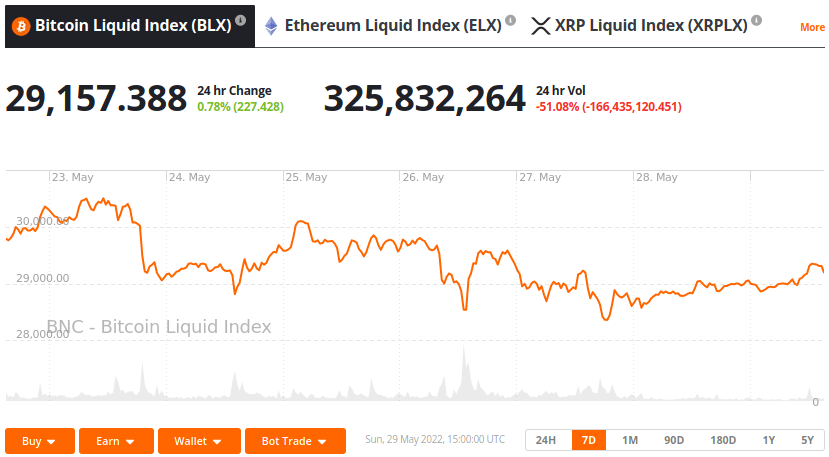 Long term holders of both Bitcoin (BTC) and Ether (ETH) would find Glassnode’s weekly report this week particularly insightful. Due to Bitcoin’s 4-year cycles coinciding with its issuance rate halving schedule and the tendency for alt-coin prices to loosely correlate to that of Bitcoin, the report looks at the 4-year compound annual growth rate (CAGR) of these top two digital assets and notices diminishing returns over time.
It will be interesting to watch how relevant these 4-year cycles will be, if at all, in the future. As adoption spreads more widely, particularly among institutional investors, it is reasonable to expect more of them to anticipate price increases after the halvings (as has historically happened), and if they buy sooner in advance of each halving as a result, there should be a smoothing out of price over time.
A curated weekly summary of forward-focused crypto news that matters. This week, the World Economic Forum discusses CBDCs, the market focuses on the transparency of top stablecoins, and Solana drops sharply in value.

Share
A curated weekly summary of forward-focused crypto news that matters. This week, crypto markets reel from the collapse of UST and LUNA, Fed officials warn that negative growth is coming in the near future, and smart contract tokens are hit hard during the market dip

Share
A curated weekly summary of forward-focused crypto news that matters. This week, crypto prices dip as New York state bans mining, the Bank of England warns of a recession, and the correlation between crypto and stocks surges to new highs.

Artificial Intelligence and Cryptocurrency: The Rise of AI-Focused … – Bitcoin News

Bitcoin Suisse Chairman Says EU Won’t Ban Crypto, But It May Seek to Contain It – CoinDesk