May 18, 2022 11:26 ET | Source: PlanetQuest PlanetQuest
Dubai, UNITED ARAB EMIRATES
Dubai, May 18, 2022 (GLOBE NEWSWIRE) — In a radically different approach to handling an NFT sale, PlanetQuest, has just launched its community friendly Planet Sale at planetquest.io. The Cinematic Multiverse and Blockchain Game, backed by Hollywood and Gaming talent, top tier investors and a community of over 215.000 Explorers, is pioneering a whole new sales approach that promises to eliminate gas wars, frustration and front running bots, while ensuring their first ever, real-time 3D Planet NFTs end up in the hands of deserving buyers and community members. 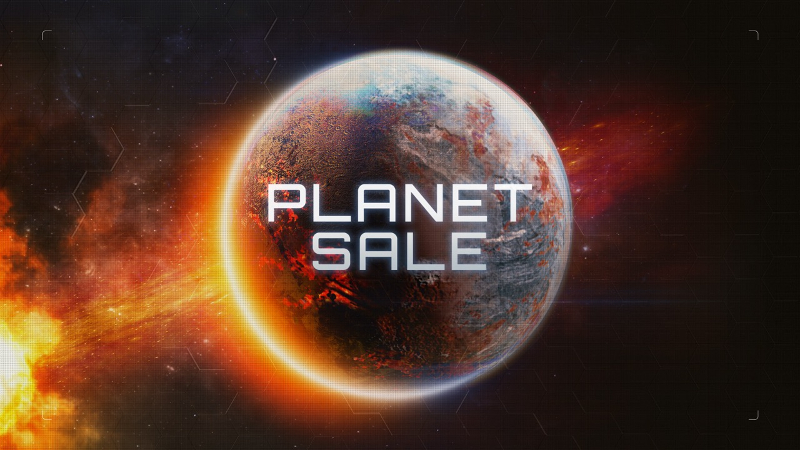 After coming out of stealth on the 15th of December of 2021, PlanetQuest had already built a massive fanbase. With its interactive storyline, that saw community members voting to decide the fate of beloved characters, closing in on the end of its first season, an ancient artifact, known as The Cradle, has been discovered and activated, opening wormholes to unexplored galaxies, and setting the stage for the next phase of the PlanetQuest journey: The Community Planet Sale.
In this sale, community members will be able to buy not just deeds to a piece of land, but entire planets, each of which is completely unique, that can be viewed from orbit in full 3D, right in the browser. Making this one of the first, instantly accessible, real-time 3D NFTs ever sold.
A New Approach to NFT sales
With demand exceeding supply by a large margin, first come, first serve NFT sales have led to massive gas wars, failed and hung transactions, frustration and crashing websites, as well as front-running bots getting their hands on NFTs intended for community members.
Instead, PlanetQuest has teamed up with Immutable X to organize a Community Sale, giving interested parties plenty of time to decide which planets they’d like to buy and submit their application on the PlanetQuest website. After the application period closes, all entries will be ranked and planets will be allotted to the most deserving entries, with Immutable X providing gas-less purchases.
“Since coming out of stealth, PlanetQuest has become an instant hit with the IMX community, leaving quite a few of our own team members addicted to its concept and storyline, and eagerly awaiting touching down on the first planets. We’re thrilled to see that, in part thanks to our technology, PlanetQuest is able to execute on its vision for a bot-less, gas-less, community friendly, Planet Sale.”
– Robbie Ferguson, Co-founder of Immutable X
Boosting your chances
For those looking to get their hands on a planet, there’s three ways to boost your ranking:
All of these avenues will be open until the 31st of May, allowing both existing members of the community and new fans to boost their chances of nabbing one, or even several planets.
Ready for a preview?
Although every planet sold will be totally different, example previews of the differing planet tiers, from Common, all the way to Legendary, are now live on the PlanetQuest website, allowing would-be-buyers the opportunity to get a glimpse of what they’re in for. With surface level visuals of the first planets expected to go live in Q3 of this year, buyers no doubt have even more stunning visuals to look forward to.
More than a collectible
Naturally, the planets are much more than just a gorgeous 3D collectible, with players of the free-to-play game needing a home planet to play the game, planet owners will quite literally hold the keys to the PlanetQuest universe. Access to higher tier planets will be in particularly high demand as they provide players with additional bonuses allowing them and the planet’s owners to earn additional Quantum or $PQX, PlanetQuest’s token and in-game currency, which is expected to go public later this year, before the game enters Early Access in Q1 of 2023.
Once opened up, Early Access will see players team up with their friends to venture out onto these uncharted planets, facing off against dangerous wildlife or worse yet, players of opposing factions, in their search for powerful gear, valuable quantum and extremely rare, planet altering artifacts.
New to the universe?
For those who didn’t discover PlanetQuest yet, there may be a lot to catch up on, as the massive community driven Cinematic Universe has been moving at quite the pace with new story drops, team member interviews and planet reveals occurring on a weekly basis. The community has, however, done a lot to help out new members, even going so far as to launch an incredibly detailed wiki at https://planetquestwiki.com as well as a PlanetQuest inspired newspaper known as The Quantum Chronicles.
Immutable X prize pool
To celebrate this first ever NFT Planet Sale, Immutable X has provided a community prize pool of 20.000 IMX tokens. Each valid application, even those that do not rank high enough to be awarded planets, will be entered into a raffle to win various prizes in the form of IMX tokens, from smaller prizes of 100-1,000 IMX to the grand prize of 10,000 IMX.
For a chance at owning one of the first real-time 3D Planet NFTs, as well as shot at IMX token prizes, prospective planet owners can submit their Planet Sale application at https://planetquest.io.
About PlanetQuest
PlanetQuest is a cinematic multiverse and free-to-play blockchain game that, for the first time, offers players the opportunity to own entire planets. Built by a global team with a shared history in games, Hollywood and procedural technology, the game promises a multiplayer exploration and discovery experience, that has players touching down on foreign planets and fending off dangerous wildlife in their search for valuable, planet altering artifacts. Future players can already join the community, at planetquest.io, where they can participate in the planet sale, vote on a universe altering storyline and earn unique NFT rewards.
To learn more about PlanetQuest visit: https://planetquest.io |  Twitter, Medium
Contact: press@galacticentertainment.com
About Immutable X
Immutable X is the first and leading Layer 2 scaling solution for NFTs to enable gas-free minting and trading, while not compromising the security of the most used blockchain globally for NFTs, Ethereum. The solution, powered by StarkWare’s innovative technology, offers instant trade confirmation, massive scalability (up to 9,000 transactions per second), and fantastic developer and user experience. Immutable X has announced integrations with established marketplaces such as OpenSea and Mintable, and is powering some of the largest NFT plays across consumer apps (TikTok), social metaverse (IMVU), gaming (ESL Gaming, Ember Sword, Gods Unchained, Guild of Guardians, GreenPark Sports, Illuvium, MyCryptoHeroes+), and launchpad partners (SuperFarm, Epics.gg).
To learn more about Immutable visit: https://www.immutable.com/
Immutable social media: LinkedIn , Twitter, Medium