Bitcoin PriceEthereum PriceBitcoin newsEthereum news
A curated weekly summary of forward-focused crypto news that matters. This week, crypto markets reel from the collapse of UST and LUNA, Fed officials warn that negative growth is coming in the near future, and smart contract tokens are hit hard during the market dip
Bitcoin (BTC) dropped by more than 13% versus the previous week and currently sits at around US$30K. Ether (ETH) and Binance coin (BNB), the second and third largest (non-stablecoin) assets on the Brave New Coin market cap table, dropped by ~18% and ~16% respectively.
While the crypto sector reels from the collapse of UST and LUNA, there are more macro forces at play in relation to the wider market downturn.
In April 2020 the US unemployment rate was as high as 14.7% at the peak of lockdowns and with the federal government releasing massive stimulus packages. With unemployment currently sitting at 3.6% in May 2022, the Federal Reserve now seeks to control inflation with interest rate hikes (50 basis points with more on the way) and reducing its balance sheet.
St. Louis Federal Reserve Bank President James Bullard argued that increasing interest rates to 3.5% before year end is necessary to control inflation.
Federal Reserve Bank of Cleveland President Loretta Mester warned of the possibility of negative growth for the next couple of quarters this week in an interview with Bloomberg. Knowing of the inevitable increase in unemployment that is likely to result from interest rate increases and careful not to mention the “R-word” (“recession”), the Fed looks to bring inflation under control while the US government simultaneously continues to beef up defense spending during the ongoing conflict in Ukraine.
How these mixed signals will settle in the market and by when is anyone’s guess. In the meantime, while the cryptocurrency market still, for now, moves in sync with rather than an alternative to the traditional financial system, the cryptocurrency market moves bearishly downward with the traditional stock market.
In an interview this past week, American billionaire investor and Galaxy Investment Partners CEO, Mike Novogratz, suggested that the coupling of crypto assets with more traditional assets like equities came about as a direct result of assets being propped up during “free money” era of Covid spending and that the decoupling would only happen only once “normalized conditions” have returned. Indeed the relation between easy money and a spike in various asset classes seems to be supported by the data: with upward spikes in equities, housing prices, commodities, and, yes, cryptocurrencies. In each case, prices spiked in the months after March 2020 and now are settling downward. Novogratz says he believes that widespread adoption will come about once stability has returned to non-crypto markets.
But when exactly Bitcoin and other cryptocurrency prices will again reflect the original cypherpunk vision of serving as an alternative to the traditional financial system rather than a short-term speculative asset in the wake of easy money printing remains to be seen.
16 May
Don-key, a “social trading platform” for yield farming that allows traders to copy yield farmers and their strategies, announced the launch of version 2. Don-key’s announcement advertises that the new version will increase “decentralization, customization, specification, and education to the platform”.
17-19 May
Permissionless Conference, Palm Beach Florida. A veritable who’s who of crypto and crypto-adjacent luminaries are scheduled to speak to about their product roadmaps this week including the founders of Axie Infinity, Celsius Finance, Compound Finance, FIreblocks, Robinhood, AAVE, Bankless and many more.
19 May
EOSIO will hard fork this week in order to develop an independent blockchain from Block.one, the EOSIO architect. According to Block.one cofounder Daniel Larimer, the objective of the fork is to allow for larger smart contract sizes, eliminate account creation costs, allow for privacy tokens, and improve configurability of future features. 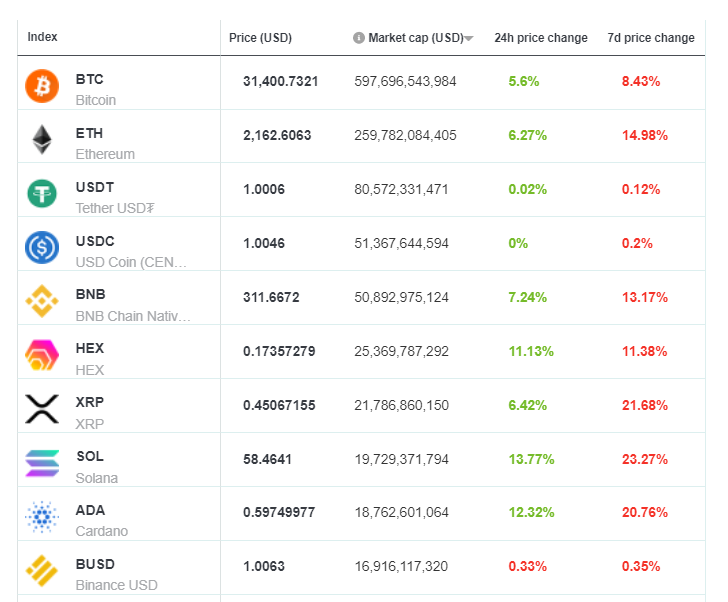 It was a bearish week all the way down with Solana (SOL) amongst the hardest hit. In fact, nearly all smart contract tokens took a dive over the past week — in sync with the general crypto market – and in terms of their resilience, smart contract (Ethereum alternative) blockchains have so far failed to adequately distinguish themselves from Ethereum itself.

Glassnode’s on-chain special report this week looked at bitcoin transactions waiting to be mined into blocks (in the “mempool”), the mining fees that bitcoiners were willing to spend to have those transactions go through, as well as the flow of both bitcoins and stablecoins into and out of exchanges.
Glassnode noted a huge spike in the mempool and mining fees, and even the second highest depositing of on-chain bitcoin into exchanges since the 2017 bear run. It also noted a large redemption of USDC (selling for fiat) as traders “derisk”. These factors together, Glassnode attributes to “macro uncertainty, liquidity provisions and tightening monetary policy”.
While prices still matter for everyone to some degree, as we have noted from Glassnode’s on-chain Bitcoin blockchain analysis from previous weeks, those that are more price sensitive are predominantly short-term holders. Similarly, those that are willing to “HODL” — even in the face of unrealized losses — are long-term holders. Indeed for traders with long-term time horizons, the present bear market arguably a buying opportunity.
A curated weekly summary of forward-focused crypto news that matters. This week, crypto prices dip as New York state bans mining, the Bank of England warns of a recession, and the correlation between crypto and stocks surges to new highs.

Share
A curated weekly summary of forward-focused crypto news that matters. This week, the Central African Republic adopts Bitcoin, Brazil votes in a new cryptocurrency regulation bill, and Cardano is the biggest loser amongst large-cap assets.

Share
A curated weekly summary of forward-focused crypto news that matters. This week, Bitcoin prices face opposing bullish and bearish forces, The cryptocurrency space is rocked by a major North Korean hack and Ether prepares for its Proof-of-Stake transition.

Some Things to Be Thankful For, Even Though Everything in Crypto Is On Fire – CoinDesk