NFTs are being used for far more than just proving you own a JPEG on the internet. Americana Technologies, a startup founded early last year by designer Jake Frey, allows brands and creators to turn physical items such as streetwear, collectibles, cars and artwork into NFTs.
The startup’s core product is its NFTA Universal Chip, which can be attached to a physical object and links that object to the blockchain. The traditional art world provides a useful example, Frey said. Imagine walking up to an artwork, being able to scan it with your phone and seeing its entire web presence and ownership history pop up on your screen — that’s how the chip turns any object into a NFT, he explained. 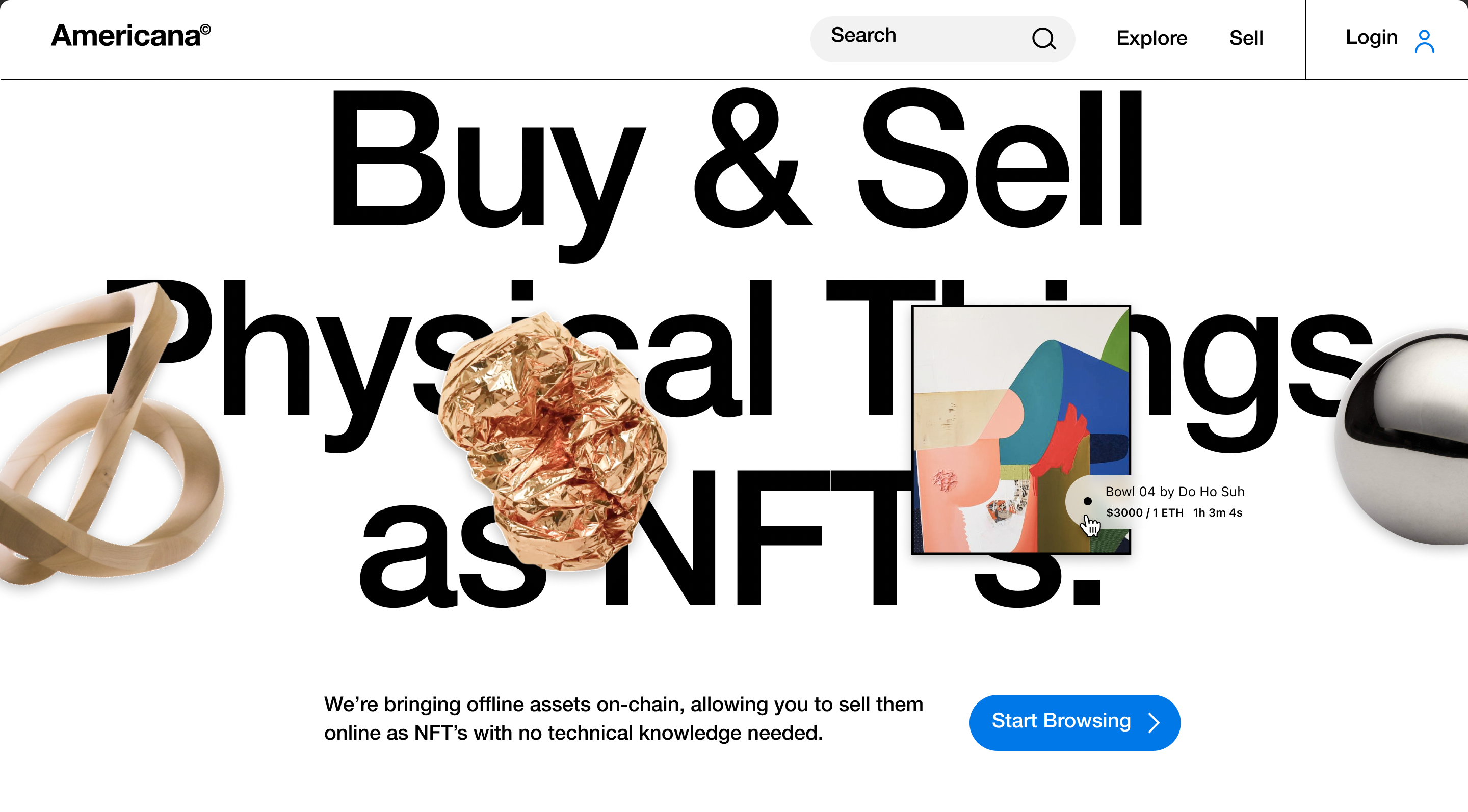 An image of NFT startup Americana Technologies’ website. Image Credits: Americana Technologies
The value of recording information about a physical object on the blockchain lies in an NFT’s ability to prove an item’s authenticity and provenance as well as to provide a method through which an artist or a creator behind that object can earn royalties each time it changes hands.
“When we talk about NFTs, there are images and songs and videos and all of these things, but the sort of lightbulb [for Americana] was that all of these things are files,” Frey said. “Of course, files are very easy to transact on the internet, but what about everything else?”
Digital artists and creators such as illustrators and 3D designers have made millions from rolling out NFTs, but they make up a small minority of creators overall, Frey said. The initial idea behind Americana came from Frey’s thoughts about how the “other 99% of creators” who are not digitally focused but instead create physical objects could gain value from NFT technology, he added. Frey declined to share the number of customers the company has today, nor the number of creators using its platform.
Americana just raised $6.9 million in seed funding led by Alexis Ohanian’s venture firm Seven Seven Six, with participation from NFT marketplace OpenSea and rapper Future, the company said.
Ohanian, who co-founded social networking forum Reddit, makes sense as a partner for the young firm because of his track record in building, nurturing and monetizing online communities, according to Frey.
“There are different use cases for transacting [through Americana], and then sort of collecting or flaunting, I guess — like bragging. The average U.S. household actually has about several thousands of dollars in assets, and, for the first time ever, you can put all these things on-chain and you can just sort of brag about all the cool things that you have in real life that already have enormous value, and already have enormous communities built around them,” Frey said.
Frey plans to use the funds to grow the 13-person team by adding engineers and designers, and to build a product focused on creating physical representations of digital assets. The company only supports NFTs on the Ethereum blockchain today but is exploring integration with Solana and other chains as it grows, according to Frey.
“Our goal is to blend these [physical and digital] worlds, so coming at that from both angles is definitely something that we want to do,” Frey said.
Crypto Bahamas signals stronger ties between old and new worlds of finance